All drinking water systems strive to provide safe drinking water whenever possible. Providing safe drinking water for your family is important, one way to ensure this is to limit the amount of arsenic in it. Arsenic is a naturally occurring grayish-white metal-like material that can be extremely toxic. It is created when elemental arsenic mixes with oxygen, chlorine and sulfur. Ingesting Arsenic is highly dangerous and it is hard to detect being odorless and colorless. The LD50 defines the oral lethal dose that will kill a person, lethal levels consumed (LD50) is between 15 and 30 mg/kg (milligrams of arsenic per kilogram of body weight). However long-term exposure to lower arsenic levels starting at 2 mg/m³, has been known to cause some very severe effects such as cancer, especially bladder, lung and kidney cancer, diabetes and heart disease.

On January 23rd, 2006 such risk factors caused the EPA to set a limit of 0.010 mg/L of arsenic allowed in drinking water to limit to risk of harmful effects, per Federal Primacy Revision Crosswalks, Appendix J. (water.epa.gov)

Arsenic is a naturally forming toxin that builds up on and release into pipes and storage tanks. This build up is known as the formation of arsenic scales, known to form in raw water pipes and contain relatively high arsenic concentrations. When these scales dislodge and get caught in water they can ultimately deliver high levels of arsenic over time to consumers. 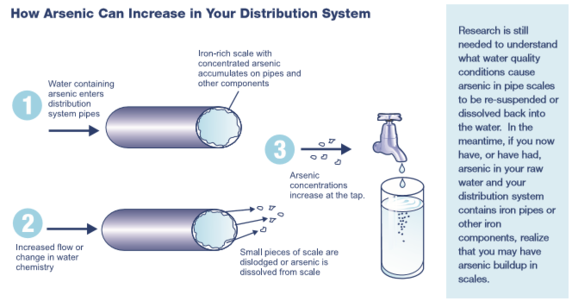 Arsenic attracts iron when released into pipes. Iron is so effective at binding with arsenic that the corrosion caused by the iron can have high levels of concentrated arsenic. Recent studies by the EPA found that arsenic levels found in solids that were collected after pipes were sectioned and hydrants were flushed were as high as 13.65 milligrams of arsenic per gram of solid made up of iron build ups.

Even if your water has detectable levels of arsenic below the 0.010mg/LMCL but you have iron pipes or components in your distribution system, you may still find high level arsenic scales attached to your iron pipes that could dislodge at any time. Undisturbed scales may remain attached to the iron for many years, flushing your mains or fire flow conditions have been known to result in the scales being jarred loose and suspended, releasing arsenic into the water stream and ultimately into the consumers tap.

How can I tell if Arsenic is a Problem in my home? Drinking water regulations require that public water systems monitor for arsenic at every entry point into the distribution system, but there is no monitor once it is inside the system. There are test that to check the levels of arsenic being released into your water supply by checking the locations most likely for iron solids or pipe scales to build up. Be cautious when using arsenic treatments in your water, the treatment you install may change the water quality in other ways. Changes in taste, odor or appearance of water when coming out of the tap are the first indication that you may have an issue and you should have your water tested.

Should I have my water tested? If your water comes from a private or municipal owned company that has more than 15 service connections or supplies 25 people or more in 6 months they are already testing your water levels. If you own your own individual or small group well then you are responsible for testing the arsenic levels. You should contact your local health department or check your local yellow page listings for a testing laboratory in your area, just be sure they do certified drinking water testing. You can also call the Safe Drinking Water Hotline at 1-800-426-4791 to request names of local certified labs in your area.